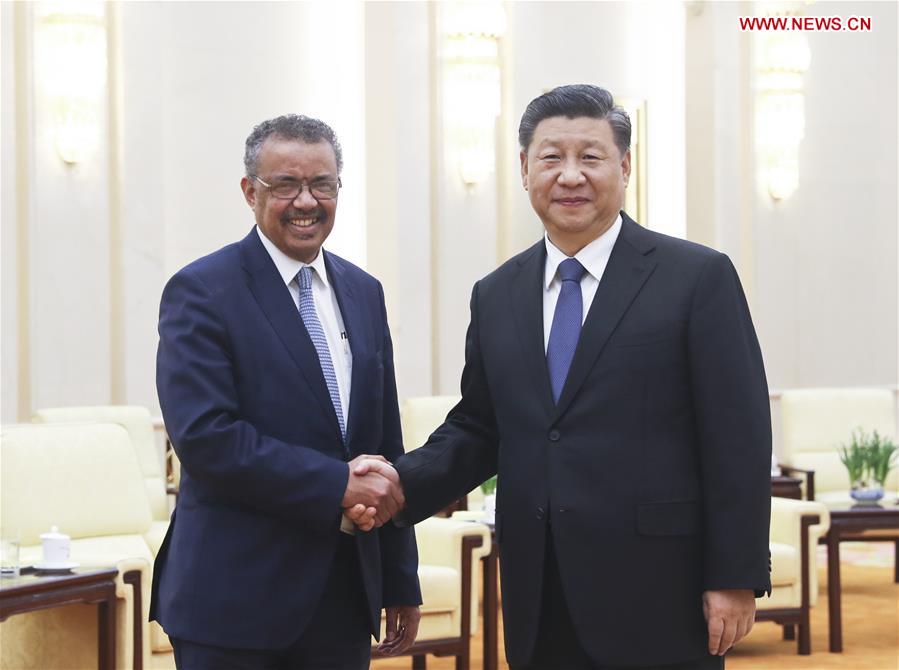 BEIJING, Jan. 28 (Xinhua) -- Chinese President Xi Jinping said Tuesday that China has full confidence and capability to win the battle against the outbreak of pneumonia caused by the novel coronavirus (2019-nCoV).

Xi made the remarks when meeting with visiting World Health Organization (WHO) Director-General Tedros Adhanom Ghebreyesus at the Great Hall of the People in Beijing.

The Chinese people are now fighting a very serious battle against the epidemic, said Xi, adding that the people's safety and health always come first, and thus the prevention and control of the outbreak is the country's most important work for now.

Xi said he chaired a special meeting of the Standing Committee of the Political Bureau of the Communist Party of China (CPC) Central Committee on the outbreak on Saturday, the first day of this lunar new year.

He said the comprehensive deployment has been made for the containment and mitigation of the epidemic, and a central leading group on battling the virus was established.

"The epidemic is a devil. We will not let it hide," said Xi.

Chinese government has released information about the epidemic in a timely, open, transparent and responsible manner, responded to concerns of all sides actively, and enhanced cooperation with the international community, Xi said.

Hailing the WHO's important role in coordinating global public health affairs, Xi said China attaches great importance to the cooperation with the WHO.

The WHO is welcome to participate in the epidemic containment, Xi said, adding that WHO experts have visited Wuhan in central China where the virus first broke out.

China is ready to work with the WHO as well as the international community to safeguard regional and global public health security, Xi said.

Xi said he believes that the WHO and the international community will assess the epidemic situation in an objective, just, calm and reasonable way.

China has the full confidence and capability to win the battle against the virus with concerted efforts, scientific containment and targeted policies under the strong leadership of the CPC, said Xi.

Tedros said it is admirable that the Chinese government has shown its solid political resolve and taken timely and effective measures in dealing with the epidemic.

He said that China has released information in an open and transparent manner, identified the pathogen in a record-short time and shared the genetic sequence of the novel coronavirus in a timely manner with the WHO and other countries.

China's measures are not only protecting its people, but also protecting the people in the whole world, he said.

Hailing the high speed and massive scale of China's moves are rarely seen in the world, Tedros said it showed China's efficiency and the advantages of China's system.

The experience of China is worth learning for other countries, he said, adding that he believes the measures China has taken will effectively control and finally prevail over the epidemic.

The WHO firmly supports China's measures against the epidemic and stands ready to enhance cooperation with China and provide all necessary assistance, Tedros said.

He said the WHO will make assessment based on science and facts, and opposes overreaction and groundless accusations.

The WHO speaks highly of China's major role in and great contribution to the cause of global public health, and is ready to further conduct strategic cooperation with China, said Tedros.

Most Read The Latest